Glimpses from Federal Bank Alpha Palliative Care Walkathon with an aim to share the vision to increase the availability of hospice and palliative care throughout the state by creating opportunities to speak out about the issues, to raise awareness and to understand the needs like medical, social, psychological and spiritual - of people living with a life limiting illnesses.

The Federal Bank in association with Impresario Event management India Ltd organized "SPARSH" an approach towards helping the children with disabilities. The programme focused on "Children with Speech and Hearing Disabilities. Sparsh was a residential workshop for the kinds and their families from 20th to 24th May, 2013. The workshop deal with activities like counseling session for the kinds as well as for parents, Medical checkup, yoga classes' etc. 25 families were shortlisted for the program.

Photo: The participants at lulu – Sparky's

Photo: Raju Hormis, HEAD CSR and Sparsh team with the participants at the closing ceremony of "Federal Bank SPARSH".

On the occasion of World Environment Day, as part of their CSR initiatives, Thiruvananthapuram Zone organized an environment enrichment ceremony, planting over 100 different saplings inside the Technopark campus. IT professionals & our bank employees also joined hands in a Group Run - spreading the message of Think. Eat. Save. which was flagged off by Hon'ble District Collector – Thiruvananthapuram, Shri K N Satheesh. Shri. K I Varghese, GM-NW 1 and Shri. C P Sasidharan, DGM & ZH, Thiruvananthapuram were present on the occasion. 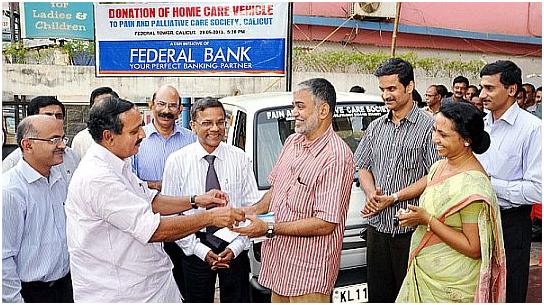 Federal Bank as part of its CSR initiative, donated a Maruti Omni as a Home Care Vehicle to the Pain and Palliative Care Society, Medical College, Kozhikode. The documents and key of the vehicle was handed over by Sri. M K Raghavan, Member of Parliament to Dr. K Suresh Kumar, President of the Society in the presence of Sri K R Vijayakumar, DGM & Zonal Head, Sri V O Pappachan, AGM, Zonal Office, Kozhikode and other members of staff of Zonal Office, Kozhikode, nearby branches and general public.

Federal Bank employees from Bangalore had an active participation in the TCS Majja Run a fund raising program for slum development which was a 5 kilometer run in which more than 50000 runners from various corporates participated. We had an enthusiastic group of ladies and gentlemen, charged with lots of excitement which included our MD & CEO, Mr. Shyam Srinivasan, Mr. Jose K Mathew, Zonal Head- Bangalore, Mr. Abu George, Regional Head- Bangalore and Mr. P P Thomas, AGM- Bangalore Credit Hub.

For Federal Bank, Corporate Social Responsibility (CSR) has been an inherited and inbuilt element of its fundamentals right from the day the bank was founded.Some of the major accomplishments and activities for the year 2012 are given below. 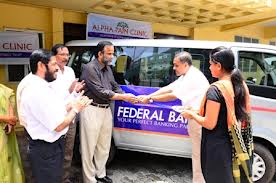 In joint venture with People's Council for Social justice, a Mela was organized for exhibition and sale of products by physically challanged people. Mela aims at providing an exposure to their products and giving them a dignified and independent life.

Jyothis is a Developmental Training School for children having cerebral palsy and other developments. The school is expanding to support more families coming from far off places. Bank has extended financial support for the building project.

Kerala Blind school Society is a voluntary association serving the visually handicapped of Kerala from the year 1962. All services of the society are free and provided irrespective of religion, caste, creed, sex or community. The Bank has extended financial supported to Kerala Blind School for constructing a ‘Blinds Friendly Girls Hostel' at Aluva.

Alpha Charitable Trust is providing social welfare support to those in distress, without discrimination of race, religion, caste, creed or political affiliation. Bank supported financially for purchasing a small ambulance to carry patients in and out of the Alpha Pain Clinic, Kochi.

Sponsored an Ambulance for St. John's Health Service, Trivandrum for the use of patients suffering from HIV/AIDS. 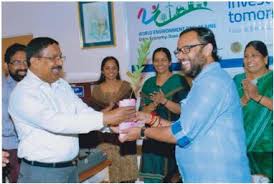 World Environment Day is one of the principal vehicles through which United Nations (UN) stimulates worldwide awareness of environment and enhances political attention & action. World Environment Day was celebrated at Federal Bank with various activities including distribution of saplings to the customers from selected Branches. Approximately 1300 saplings were distributed from 41 branches all around India.

Foundation is running a campaign in all schools of Ernakulam to educate students about the diseases caused by using alcohol, drugs, tobaccos and other harmful products.

Maithri foundation Trust, Cochin provide ‘Suicide Prevention Programmes' to the needy. They are constructing a Counseling Centre at Ernakulam. As a fund raising program they conducted Soorya Monsoon Festival at cochin for three days. Bank sponsored the three day festival.

Empowerment Centre for the Blind (ECB) is a registered trust founded by Mr. Balaraman P. The trust aims at improving the overall life standards of the blind community in Kerala. Through access technology the Trust wish to bring out drastic chance in education, employment opportunities and status of the blind people in the society. Bank supported trust by funding Five Desktop Computers.

For Federal Bank, Corporate Social Responsibility (CSR) has been an inherited and inbuilt element of its fundamentals right from the day the bank was founded.Some of the major accomplishments and activities for the period 2010-11 are given below.

On 8th November 2011, Dr.C.Rangarajan, Chairman of the Prime Minister's Economic Advisory Council inaugurated Call Centre at Thottakkattukara, Aluva. The Call Centre is managed by differently abled. The design and interior of call centre are developed in such a manner that it fulfills the needs of those working there.

During the year 2011, Bank sponsored Hemophilia Department at MAGJ Hospital, Mookkannoor. The main aim is to assist in the investigation and diagnosis of Hemophilia among the poor. 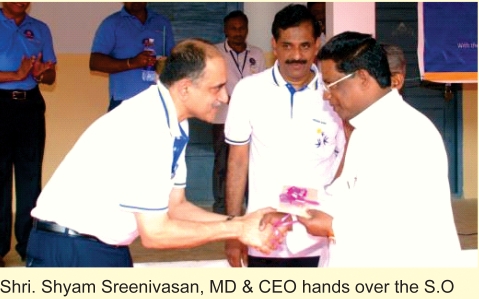 Aluva is the home town of Federal Bank. Bank has developed and is maintaining a highway garden between Thottakkatukara Junction and Bye pass Junction in NH47 at Aluva with permission from the National Highway Authority. The garden forms the divider between the incoming and outgoing lanes and it covers the approaches to the Marthandom Bridge from either side. The traffic lights at both ends and the high mast lamps at the bypass junction are also provided by the Bank.

Bank supported the building fund of "Animation and Renewal Centre" built under Santhome Charitable Trust of Kalyan. The centre is used for conducting residential programmes for the Trust's focus and target groups including SHGs, NGOs, CBOs and Children groups.

With an aim to help the small rubber growers, the Bank has implemented a scheme for extending working capital finance to well run Rubber Producers' Societies promoted by the Rubber Board. The scheme is designed to achieve financial independence of RPS, resulting in overall development and economic growth of small rubber growers. More than 1000 societies representing nearly a lakh of Small Rubber Growers have benefited by the scheme so far.

On the Health Front

Modernisation of the Medical Ward of Ernakulam General Hospital in association with Rotary Club of Cochin Mid Town. General Hospital, Ernakulam is located between the Subhash Chandra Bose Park and the Head Post Office, Ernakulam. It is a multi specialty hospital with all the major and minor specialties attached to it and is the biggest General Hospital in Kerala. The hospital caters to the general public and close to 1500 patients visit the OP every day. Even though the bed strength is only 743, more patients are housed in the wards. Bank has donated towards the modernization of the medical ward.Dialysis machine for Kerala Kidney Research Foundation, Kottayam.The Kerala Kidney Foundation has established dialysis unit at the SH Medical Centre and St.Mary's Dialysis Unit at Karippal Hospital, Kottayam and PVS Hospital Kochi, providing subsidized and free dialysis. The dialysis machines were donated by many individualsDonating ambulance to Kadungalloor Grama Panchayath.The Kadungalloor Panchayath, which consists of 20 wards and spread over 17 sq. Km. area faces challenges such as growing urbanization, increasing population and industrial pollution. There are occurrences of many health hazards and people living close to the industrial areas need frequent hospitalization. The Public Health Centre at Binanipuram in the Panchayath has no ambulance at present. The people have to depend other Hospitals/organisations for an ambulance service, mostly from places as far away from Aluva. In emergency situations this causes great difficulty. The Panchayath has very limited resources to buy an ambulance.

Financial assistance to Santhwanam- project for orphans. Santhwanam is a project for the orphans. It is being implemented by Rotary Cochin Central. Kochi City had many orphanages without even the basic facilities, without access to proper sanitation and basic comforts like beds. These orphanages are forced to shift location every now and then from one rented building to another.   Rotary in a collective decision decided to take up a mega project to construct a 4000 sq. ft building with all facilities to accommodate at least 50 of these children. Adequate conveniences such as play area, toilet facilities, kitchen, dining area etc. would be incorporated. The project is named as Santhwanam.

SOS Children's Villages of India is an NGO working with children. They provide long term family like care to children who lost their parents. Every child who comes to SOS Children's Village receives a ‘mother', brothers and sisters, a home and all opportunities to grow into happy and successful adults. SOS has been working in 132 countries with SOS-Kinderdorf International as the umbrella organisation that was established in 1964. At present there are 38 children's villages spread across the country.Bank is proud to have associated with SOS (2006) in constructing a ‘Learning Centre' at the Choondy Unit, 4 Kms from Aluva. It was constructed over an area of 1076 sq. ft.  The centre comprise of a library, music room and computer lab.

Aluva is the home town of Federal Bank. Bank has developed and is maintaining a highway garden between Thottakkatukara Junction and Bye pass Junction in NH47 at Aluva with permission from the National Highway Authority. The garden forms the divider between the incoming and outgoing lanes and it covers the approaches to the Marthandom Bridge from either side. The traffic lights at both ends and the high mast lamps at the bypass junction are also provided by the Bank